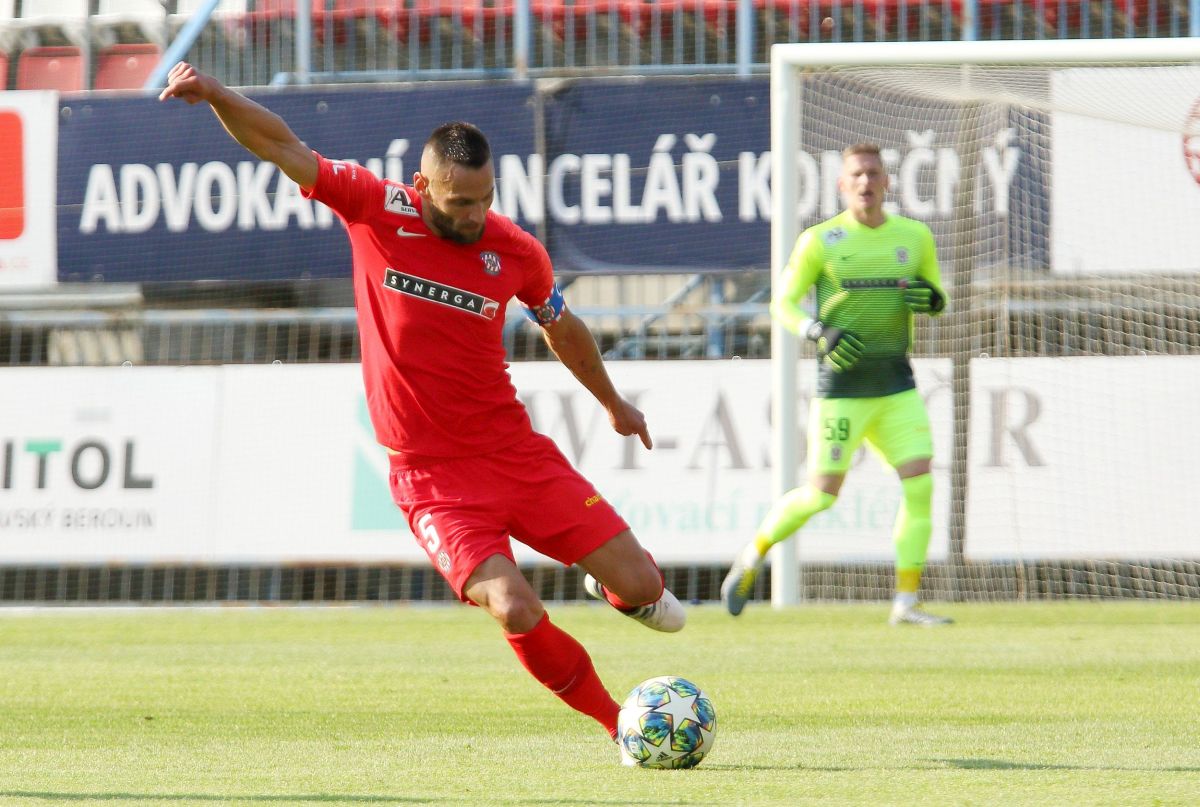 Pavel Eismann, who captained FC Zbrojovka through two successful second-league seasons, will retire instead of moving up to the Fortuna Liga next season with the team. Photo credit: FC Zbrojovka.

Brno, Jul 22 (BD) — FC Zbrojovka will take a short rest before starting to train for their return to the Fortuna Liga on Aug. 22; Draci, Hroši start play in Top 6; Cricket will have a Brno Derby on Saturday with Brno Rangers against Brno Raptors at 3 p.m.; and the Brno sports schedule.

All is right with the world: Zbrojovka has returned to the top league.

After two successful seasons in the second-league Fortuna:Národní Liga, where the team finished third in 2018-19 and second in 2019-20, FC Zbrojovka will return to the top-league Fortuna Liga and rivalry games against Slavia Praha, AC Sparta, Olomouc, Zlin, and, especially, Slovacko.

The Fortuna Liga will start on Saturday, Aug. 22. The schedule is to be announced.

The announcement was part of a compromise solution to account for a recent outbreak of the coronavirus that affected MFK Karviná and postponed the conclusion of the Fortuna Liga Relegation Group, which has four teams who still need to play two rounds later this month. The plan is that the Fortuna Liga will replace whoever is the bottom team with the second-league champions (i.e., FC Pardubice), keep the rest of the teams at the higher level and simply promote two teams from the second league (i.e., Zbrojovka and third-place FC Dukla Praha), rather than play the home-and-away Promotion/Relegation series. (However, if the Relegation Group games are not completed, then no teams would be relegated and Dukla Praha would have to stay in the second league.

In any case, that means that the Fortuna Liga will have 18 teams, two more than normal. The 2020-21 season will have 15 rounds in the autumn and the remaining 19 in the spring. The bottom three teams will drop to the lower league at the end of the season so that the two leagues will level off at 16 clubs again for the 2021-22 season.

The Top 6 portion of the extraliga baseball season has started with three-game series to figure out the seeding for the postseason.

Arrows Ostrava, the two-time defending Czech champions, finished atop the standings after the first phase with a 15-3 record and beat Tempo Prague two out of three times over the weekend.

Draci Brno won both of its games against Kotlářka Praha with 3-0 shutouts. (The Saturday game was rained out.)

The two first-league Brno Cricket Club teams struggled out of the gate in the Czech T20 season last weekend.

The Czech T20 league continues this weekend, with a Brno Derby: Brno Rangers versus Brno Raptors at 3 p.m.

Brno Half Marathon Will Be Run on Aug. 15

BehejBrno.com, which had two spring races postponed by the pandemic quarantine, has announced the new dates for its races this year.

• The Špilberk Night Run will be run Aug. 29, as originally scheduled. It is a 7 km race that will circle around the castle and wind down through the casemates. The entry fee is 400,- until Aug. 27. You can get a 50 percent discount if you run a race as part of the CRAFT Brno Half Marathon event.

• The Brno 25 will be run on Oct. 18 in the fields near the Olympia Shopping Mall. There will also be 8 km and 16 km races. The entry fee for the big race is 390kc until Sept. 15. The other races are 350kc. You can get a 50 percent discount if you run a race as part of the CRAFT Brno Half Marathon event.

• The RENOCAR AŽ Tower Race has been postponed from the spring to Oct. 25.

For more information, go to https://www.behejbrno.com/.

https://www.brnodaily.com/2020/07/22/sport/brno-sports-weekly-report-zbrojovka-earns-promotion-to-top-league/https://www.brnodaily.com/wp-content/uploads/2020/07/Eismann-credit-FC-Zbrajovka-1024x689.jpghttps://www.brnodaily.com/wp-content/uploads/2020/07/Eismann-credit-FC-Zbrajovka-150x101.jpg2020-07-22T11:30:46+02:00Bruno ZalubilBrnoSportBrno,SportPavel Eismann, who captained FC Zbrojovka through two successful second-league seasons, will retire instead of moving up to the Fortuna Liga next season with the team. Photo credit: FC Zbrojovka.Brno, Jul 22 (BD) — FC Zbrojovka will take a short rest before starting to train for their return to the Fortuna Liga on Aug. 22; Draci, Hroši start play...Bruno ZalubilBruno Zalubilbzalubil@hotmail.comAuthorA connoisseur of the unpredictable and unscripted drama of sports.Brno Daily

A connoisseur of the unpredictable and unscripted drama of sports.
View all posts by Bruno Zalubil →
« In Photos: New Exhibition “The Time of the Knights of the Far Seas”
Two Dead In Collision Between Train and Car »