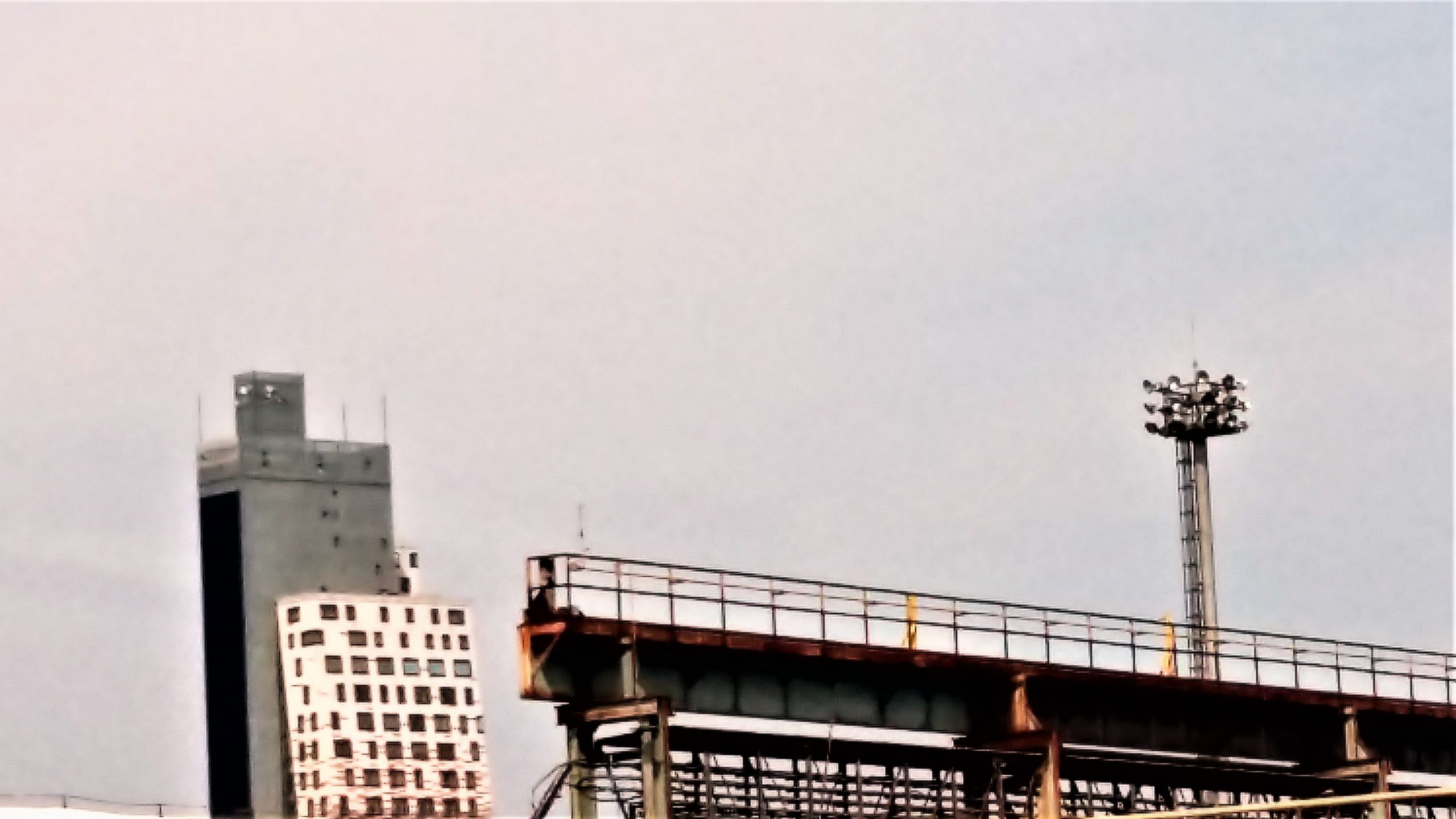 A short distance from the AZ Tower is a gritty industrial zone in South Brno where a lot of the economy exists, even if it is hidden in plain sight. Photo credit: Bruno Zalubil.

Factories are something that I never directly encountered in the United States. I knew there was a large slaughterhouse somewhere near my hometown. A stinky paper plant was down the Columbia River. And, infamously, the nearby Hanford Nuclear Reservation had huge buildings for processing weapons-grade plutonium.

The majority of the blue-collar work that I knew about during my youth was out in the orchards and the fields. (See the recent article in the New York Times for an accurate slice-of-life story from where I grew up: The Scramble to Pluck 24 Billion Cherries in Eight Weeks.)

The Brno area also has many farms. But, within a kilometer of where I live, there are also several factories with boxy buildings, tall ceilings, triangle skylights and smoke stacks. In fact, within a couple of hundred meters there is a custom metalworks and a foundry, which, when its furnaces are going in the middle of the night, literally shakes the furniture of my home.

Brno may have a burgeoning white-collar tech industry — it has been called “the Silicon Valley of Central Europe” — with tech incubators and world-famous software firms that have built upon excellent universities and a long history of electron microscopy. But, at its heart, Brno is still a blue-collar town, with workshops and a lot of physical labor.

During the coronavirus quarantine period, when limited to looking longingly out the window, there was time to contemplate what was actually out there in my neighborhood. Is someone in that house suffering with a fever? Will that older couple get sick? And, what about the economy . . . hey, wait a minute, there are a lot of big factory buildings out there.

I’d lived in south Brno for more than eight years yet I never appreciated the number of large buildings that produce I don’t know what.

The steel-related businesses, which attracted American bombers during World War II, are plenty, including several foundries. They build custom railings, grids, scaffolding, everything.

This shouldn’t be surprising. Yet, somehow it was all hiding in plain sight. My neighborhood was, basically, designed to house the workers.

Here in the Czech Republic, I have actually had occasion to tour many factories (and breweries).

My first English-teaching job was in a little room off of the main floor of a factory in Slatina. It was exciting to see the organization, the logic, the precision, the safety precautions, the conveyor belts, the machinery. The sounds and smells were real and authentic.

That first class led me to a develop my favorite lesson: the factory tour. You be you; I’ll be the visiting VIP. You’ll need to be able to interact correctly with English-speaking visitors.

I’ve given that factory-tour lesson dozens of times. Sometimes, with well-timed questions and stops for error correction, I stretched it into two lessons. (And I got paid for it each time!)

I’ve never been inside the factories in my neighborhood. I would love to know more about them. Just what does a metalworks look like? Just how do the craftsmen work the machines? How is the factory floor designed? What are some of the legends of the buildings?

Really, though: What beautiful and durable things are being created?

Once, on one of my lesson tours, I watched a man delicately work a machine to create a perfectly circular valve casing that would fit exactly into a water turbine in a small African country. One millimeter of deviation would compromise the whole damn and possibly flood the basin below. His perfection was the difference between productive farmland and continued poverty in a dry land.

How cool is that? And it was hidden in plain sight where we all live.

https://www.brnodaily.com/2020/08/22/column/bruno-blue-collar-brno/https://www.brnodaily.com/wp-content/uploads/2020/08/Factories2208201-1024x576.jpghttps://www.brnodaily.com/wp-content/uploads/2020/08/Factories2208201-150x84.jpg2020-08-22T09:38:26+02:00Bruno ZalubilColumnBrno,OpinionA short distance from the AZ Tower is a gritty industrial zone in South Brno where a lot of the economy exists, even if it is hidden in plain sight. Photo credit: Bruno Zalubil. Factories are something that I never directly encountered in the United States. I knew there was a large slaughterhouse somewhere near my hometown. A stinky paper plant was down the Columbia River. And, infamously,...Bruno ZalubilBruno Zalubilbzalubil@hotmail.comAuthorA connoisseur of the unpredictable and unscripted drama of sports.Brno Daily

A connoisseur of the unpredictable and unscripted drama of sports.
View all posts by Bruno Zalubil →
« Brno from B to Ž: A Tough-Love Guide to the City’s 48 Neighborhoods, Part 4 – Bystrc
In Photos: Theatrical Unveiling of the New Loos Monument »