Reconstruction of Water and Sewer Systems Under Lužánecká is Complete 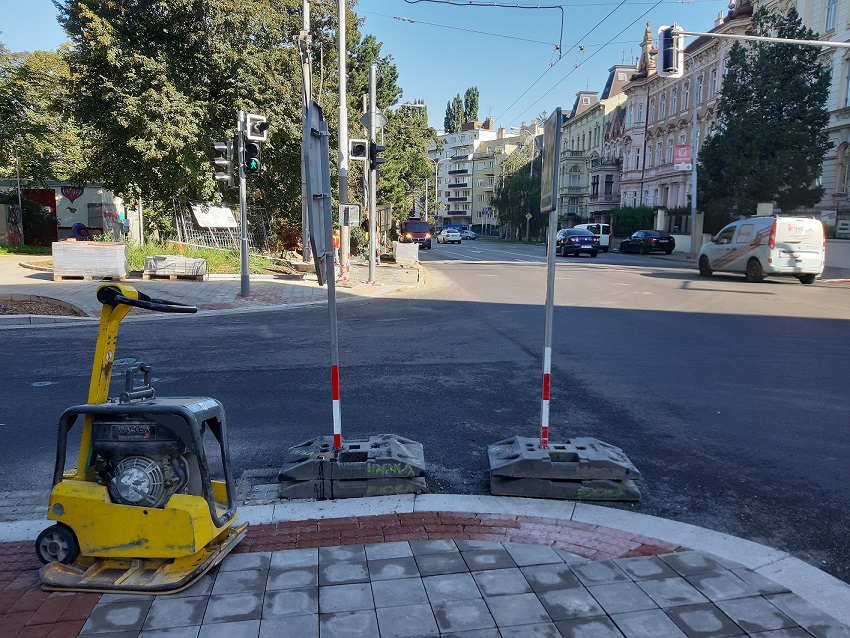 Repair and reconstruction work on Lužánecká, which runs the length of Brno’s Lužánky Park on the city side, has been ongoing since June 2019. On Monday, September 7th, the contractor will hand over the construction to the city. Only minor landscaping work remains to be completed. Photo: Lužánecká and Drobného intersection on Friday, September 4. Credit: KK / BD.

Brno, Sep 5 (BD) – Extensive reconstruction work on the sewer and water supply under Lužánecká, which has lasted over a year, is now complete, with only minor landscaping work left to finish. Contractors will hand over management of the construction to city authorities on Monday, and if all goes to plan, car traffic will resume on the street from Tuesday, September 8th.

The reconstruction of the original 19th century sewer system was coordinated with work on gas lines and other necessary repairs, which took place in parallel. The work was completed on time, despite interruptions caused by lock-down measures related to the corona-virus epidemic. Brno Mayor Markéta Vaňková (ODS) welcomed the completion of the work on schedule, adding: “I think all the locals were relieved that it was completed in September, as promised by the contractor, and there were no delays.” The contractor and the city are now preparing the street for the return of car traffic from Tuesday.

As well as Lužánecká, the junctions with Antonína Slavíka and třída Kapitána Jaroše also underwent repairs. “At our request, modifications to the intersection of Lužánecká with třída Kapitána Jaroše were also included in the reconstruction, which will enable a smooth continuation of the cycle route through the Ponávka Valley to the center of Brno,” said Vojtěch Mencl (ODS), Mayor of Brno-center.

According to Brno City Council member for investment David Grund (ODS), the work involved the repair of more than 560 metres of sewer pipes and 187.3 metres of sewer connections, the replacement of 13 water connections, and reconstruction of more than 1,300 meters of water pipes. The surfaces of the road and sidewalks are also new. In total, the work cost more than CZK 76 million crowns.

The area around Lužánky is not only important for transport. As Council member for culture Marek Fišer (Piráti) pointed out, “a number of cultural events take place regularly in the park and nearby.” Businesses along the street are organising a street party on Sunday, September 6th, to mark the completion of the work. “I believe that people will find their way back to the surrounding businesses again and thus manage to return the original spirit to this popular space,” added Fišer.

The street party, Lužánecká Open, is being coordinated by Vít Kalvoda of Ponava Cafe street party, and will start at 2pm with a ceremonial collective ride down the street of cyclists and skateboarders. The party will also feature skateboard performances and races, DJs, a performance by Czech rap legends PSH, and several stages of entertainment, as well as gastronomical attractions.

The event is taking place under the auspices of the Mayor of Brno, and is completely free to enter, with financial support from the City of Brno.

https://www.brnodaily.com/2020/09/05/brno/reconstruction-of-water-and-sewer-systems-under-luzanecka-is-complete/https://www.brnodaily.com/wp-content/uploads/2020/09/luzanky-crossing-1.jpghttps://www.brnodaily.com/wp-content/uploads/2020/09/luzanky-crossing-1-150x113.jpg2020-09-05T10:01:10+02:00Jack StephensBrnoNewsBrno,NewsRepair and reconstruction work on Lužánecká, which runs the length of Brno’s Lužánky Park on the city side, has been ongoing since June 2019. On Monday, September 7th, the contractor will hand over the construction to the city. Only minor landscaping work remains to be completed. Photo: Lužánecká and...Jack Stephens jack.stephens50@gmail.comAuthorA writer and English teacher originally from London who has lived in Brno since 2011, interested in politics, low culture, and all things strange and/or Czech.Brno Daily

A writer and English teacher originally from London who has lived in Brno since 2011, interested in politics, low culture, and all things strange and/or Czech.
View all posts by Jack Stephens →
« Br(u)no: When You Need Fuel in the Morning
Czechs Leave Home Younger Than The European Average »