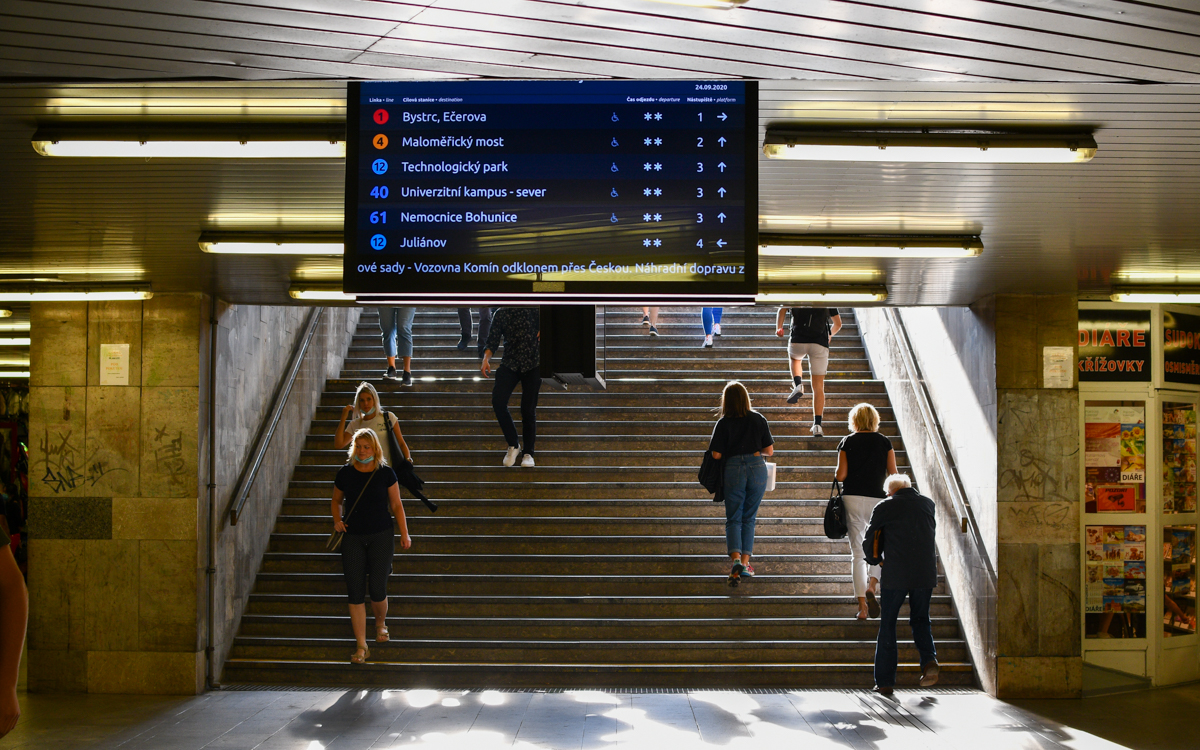 The new departure display boards should save time and ease traffic at the main train station. They were installed as part of Brno City Council’s participatory budgeting scheme, which allows Brno residents to propose and vote on new municipal projects. Photo credit: Brno Daily.

Brno, Sep 25 (BD) -New display boards showing public transport departures have been installed in the underpass at Brno’s main railway station. The new boards were installed as part of “Dáme na vás” [“We give to you”], Brno City Council’s participatory budgeting scheme. The ceremonial opening of the new boards took place earlier on Thursday.

The new departure boards include six signs in the underpass at the station displaying the next departures of trams, trolleybuses and buses. “The new departure boards in the subway of the main railway station will make travel easier for all Brno residents. I am glad that citizens are making such diverse suggestions to Dáme na vás to solve the everyday problems of life in the city,” said Tomáš Koláčný (Piráti), Second Deputy Mayor of Brno.

Dáme na vás, a so-called “participatory budgeting” scheme, allows the general public to participate in municipal decision-making by proposing improvements in Brno, which are then evaluated by the city and put to a public vote, with funds allocated from the city budget for their implementation. The ideas which have the most support from the public are then taken forward, as many as the allocated funds will cover.

In 2018, the project’s designer, Pavel Melichárek, proposed to Dáme na vás the idea of hanging departure boards in the underpass, so travellers could see which connection to take and when it would leave, thereby saving time. The project received 2,073 votes and came third in the public vote. “Together, we can now use the sign boards and save time. From Brňáks who have lived here all their lives, to tourists who are just running down the underpass in a hurry, Brno belongs to each and every one of us, so let’s make it so that we can live well here,” said Melichárek. The project cost CZK 897,000.

In November, there will be a new round of public voting to decide which other projects will be implemented. Some of the proposals are available to view on the Dáme na vás website, and will also be displayed in an exhibition on namesti Svobody from October 19th. The current progress of the winning projects from the first, second, and third years of Dáme na vás can also be followed on the website.

https://www.brnodaily.com/2020/09/25/brno/new-departure-boards-installed-in-underpass-at-brno-hlavni-nadrazi/https://www.brnodaily.com/wp-content/uploads/2020/09/Brno-underpass-new-signs-Credit_Brnodaily-1-1024x640.jpghttps://www.brnodaily.com/wp-content/uploads/2020/09/Brno-underpass-new-signs-Credit_Brnodaily-1-150x94.jpg2020-09-25T11:56:48+02:00Veronica UgwuBrnoBrno,News,TransportThe new departure display boards should save time and ease traffic at the main train station. They were installed as part of Brno City Council’s participatory budgeting scheme, which allows Brno residents to propose and vote on new municipal projects. Photo credit: Brno Daily.Brno, Sep 25 (BD) -New...Veronica Ugwu ebereezeamigi@yahoo.comAuthorI'm a writer and journalist who enjoys doing things with words. My interests range from food and fashion, to tech, travels, the economy and sometimes politics.Brno Daily

I'm a writer and journalist who enjoys doing things with words. My interests range from food and fashion, to tech, travels, the economy and sometimes politics.
View all posts by Veronica Ugwu →
« Jobspin Will Host An Expat-Friendly Webinar About The Czech Job Market
Masaryk University Rector Calls on Regional Hygiene Office to Revoke Ban on In-Person Teaching »