An overview of the latest anti-coronavirus measures, which will take effect on Monday, October 5th. The new measures, announced on Wednesday by the Health Minister Roman Prymula, will be valid for 14 days. Prymula added that the measures will be less strict than in the spring. Photo: Health Minister Roman Prymula speaking at the Czech Parliament today. Credit: PS CR.

Czech Rep., Sep 30 (BD) – A state of emergency will be declared in the Czech Republic from midnight on Monday, October 5th for 30 days, as approved by the Czech government at an extraordinary meeting on Wednesday.

According to Health Minister Roman Prymula, the state of emergency will enable the government to react more quickly to the current situation when implementing new measures and distributing medical equipment.

The goal of the new measures is to reduce the reproduction number below 1, from the current 1.24.

Hobby and sports activities will be limited to 20 people. Swimming pools, water parks and gyms will stay open, as these are not classified as “mass events”.

A maximum of six people can sit together at one table in a restaurant. Customers must maintain a safe distance of at least 1.5 metres from other customers. The closure of catering establishments to the public between 10pm and 6am remains in place, and the number of customers cannot exceed the number of seats in the establishment.

From October 19th, there will also be a new limit of 30 people for weddings and funerals. The date was selected to allow enough time to reorganize already-planned weddings.

Opera, musicals, and other performances that involve singing, including rehearsals, have been prohibited for the same period. Spiritual masses can be held without singing if the limit of 100 people is not exceeded.

Theaters and cinemas can remain open without restrictions; the number of spectators in such events where there is no singing will be limited to 500 people, who must have designated seats and keep safe distances of 2 meters. Refreshment breaks will be prohibited.

There are no new measures applied to shops.

The Minister of Health initially indicated a possible exception for students in the first years of secondary schools, but in the end the exception will not apply.

School groups and kindergartens will remain in operation.

Facebook Comments
https://www.brnodaily.com/2020/09/30/news/politics/overview-new-state-of-emergency-measures-limit-indoor-events-to-10-for-14-days-gyms-and-swimming-pools-stay-open/https://www.brnodaily.com/wp-content/uploads/2020/09/Prymula-credit-Poslanecká-sněmovna-1024x683.jpghttps://www.brnodaily.com/wp-content/uploads/2020/09/Prymula-credit-Poslanecká-sněmovna-150x100.jpg2020-09-30T18:06:21+02:00BD StaffBreaking NewsCzech Republic / WorldPoliticsCoronavirus,Czech Republic,Health,NewsAn overview of the latest anti-coronavirus measures, which will take effect on Monday, October 5th. The new measures, announced on Wednesday by the Health Minister Roman Prymula, will be valid for 14 days. Prymula added that the measures will be less strict than in the spring. Photo: Health Minister...BD StaffBD Staff team@brnodaily.czAdministratorBrno Daily - English News and Events in Brno.Brno Daily 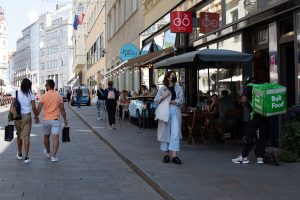