Home » BD Magazine » Eating Out / Nightlife » You are reading » 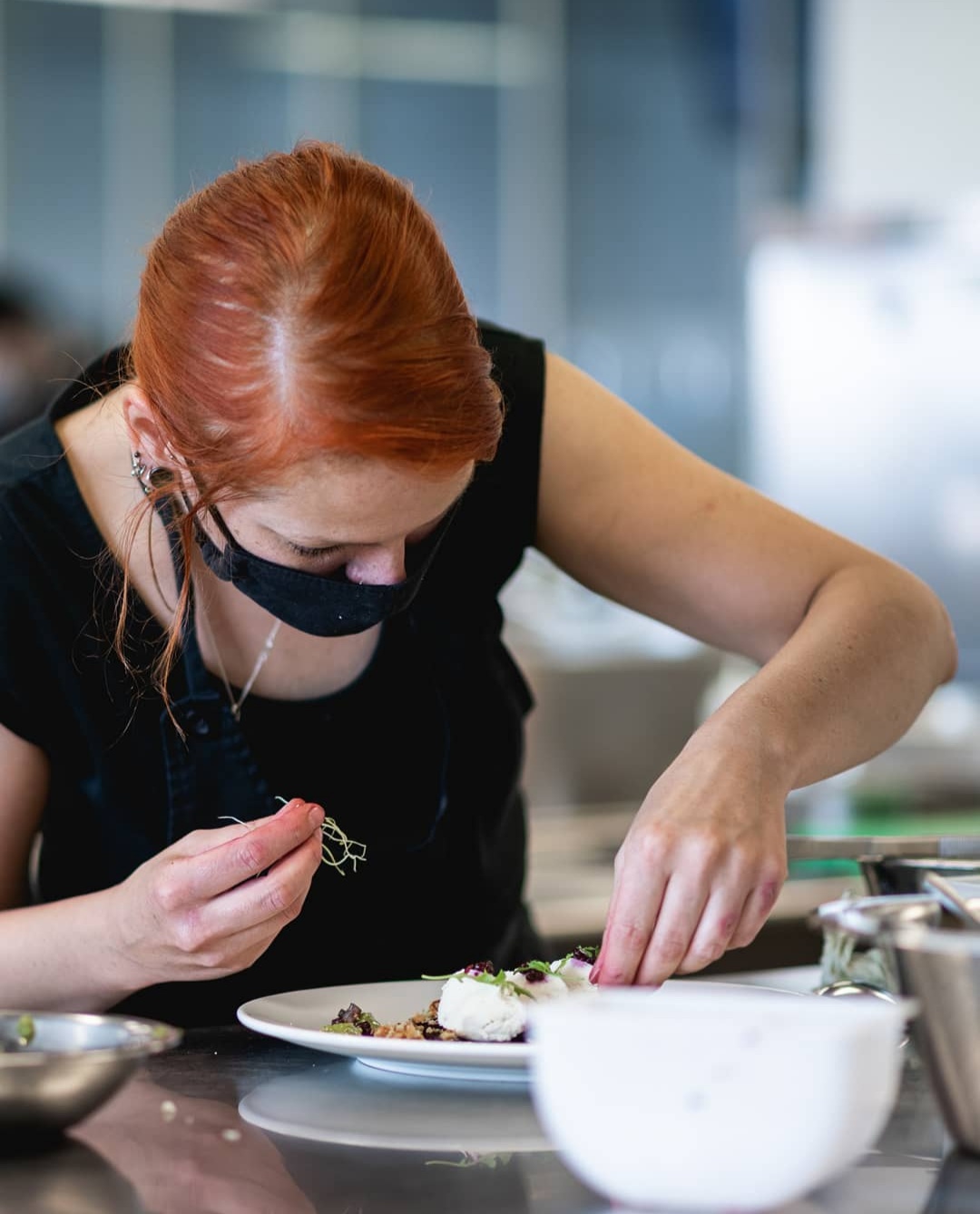 Pavla Drlíková from the Die Küche Restaurant in Brno has won the CZK 50 000 prize for the tastiest plant based dish 2020. Second place was taken by Růžena Smolenová from Alcron restaurant in the 5 star Prague hotel. The 10 finalists, all professional chefs, prepared their food for an expert panel at the Makro food academy in Prague. Photos: Barbora Seďová / Die Küche.

Brno, Oct 24 (BD) – The competition organised by the Czech Vegan Society and backed by Makro and Nestlé shows how vegan food is beginning to be noticed by mainstream food companies. “Vegan food can be varied, tasty and as nutritious as the meat-based variety, proof of this are all dishes presented by the individual contestants. They showed not only talent, but also a great deal of creativity in preparing dishes only from seasonal ingredients.” says Romana Nýdrle Communication Manager at MAKRO Cash & Carry. The competition was intended only for professional chefs and 34 chefs and cooks from both vegan and non-vegan enterprises from all parts of the Czech Republic took part in the first round. Subsequently, the top ten were selected on the basis of the recipes they submitted  meeting  the criteria. They were given 120 minutes to prepare 5 portions for the judges.

The winning dish was Carpaccio of baked beetroot, almond ‘cheese’ gnocchi, caviar of blackberries, crumble of walnuts and oatmeal  with rocket pesto.  The winner Pavla explained “the dish we presented was supposed to be seasonal, easily digestible and nutritionally balanced. I do not take food as a “filler”, but at the same time I am interested in the fact that there is enough protein, quality fats and carbohydrates in the dish… So that the taste of the individual components fits together beautifully and the person does not feel tired after eating. ”

According to a STEM/MARK survey from March this year,  the plant-based food offer in mainstream restaurants is inadequate. Although only 1% identified as vegan, 11% prefered vegan meals in restaurants, and 2/3 of those surveyed neither prefer nor  reject vegan meals in restaurants. Almost half of those who do not completely reject plant-based meals consider the offer in restaurants to be inadequate, and 32% would limit meat consumption if restaurants offered more vegan food. “The demand for plant-based food has already exceeded supply, the general population is often more knowledgeable about meatless eating than the chefs themselves,” says Zdeněk Hladík, manager of culinary projects of the Association of Chefs and Confectioners of the Czech Republic , under whose auspices the competition took place. He added “there should already be a fully-fledged plant-based meal on the menu of each restaurant, whether for sustainability, health or various food intolerances”.

Brno now has several vegan restaurants as well as Die Küche. Forky’s, Vegan Sweet bar and Pizza punk are fully vegan and well-established vegetarian restaurants like Vegalité offer mostly vegan cuisine. However, with nearly two-thirds of diners in the survey saying they are open to vegan food, other restaurants should react. Dishes like Pavla Drlíková’s winning entry show that vegan food is not about just being a meat substitute. It offers a new taste experience for all lovers of good food.

https://www.brnodaily.com/2020/10/24/eating-out-nightlife/brno-chef-lifts-top-vegan-food-award/https://www.brnodaily.com/wp-content/uploads/2020/10/vegan-2-827x1024.jpghttps://www.brnodaily.com/wp-content/uploads/2020/10/vegan-2-121x150.jpg2020-10-24T11:23:31+02:00Charles du ParcBD MagazineEating Out / NightlifeBrno,Eating Out / Night Life,VeganPavla Drlíková from the Die Küche Restaurant in Brno has won the CZK 50 000 prize for the tastiest plant based dish 2020. Second place was taken by Růžena Smolenová from Alcron restaurant in the 5 star Prague hotel. The 10 finalists, all professional chefs, prepared their food for...Charles du ParcCharles du Parcchaduparc@gmail.comAuthorCharles du Parc comes originally from London and worked there in fashion retailing for several years. Before coming to the Czech Republic in 2005, he ran his own delicatessen and café in a small town on the south coast of England. He has also served as a judge for the World Cheese Awards.Having fallen in love with Brno,he now regards it as home and works there as a freelance teacher, writer and translator.Brno Daily

Charles du Parc comes originally from London and worked there in fashion retailing for several years. Before coming to the Czech Republic in 2005, he ran his own delicatessen and café in a small town on the south coast of England. He has also served as a judge for the World Cheese Awards.Having fallen in love with Brno,he now regards it as home and works there as a freelance teacher, writer and translator.
View all posts by Charles du Parc →
« Br(u)no: So What is Your (Conspiracy) Theory?
In Pictures: Bayerova–Botanická Courtyard and Poříčí Park to Get a New Look »