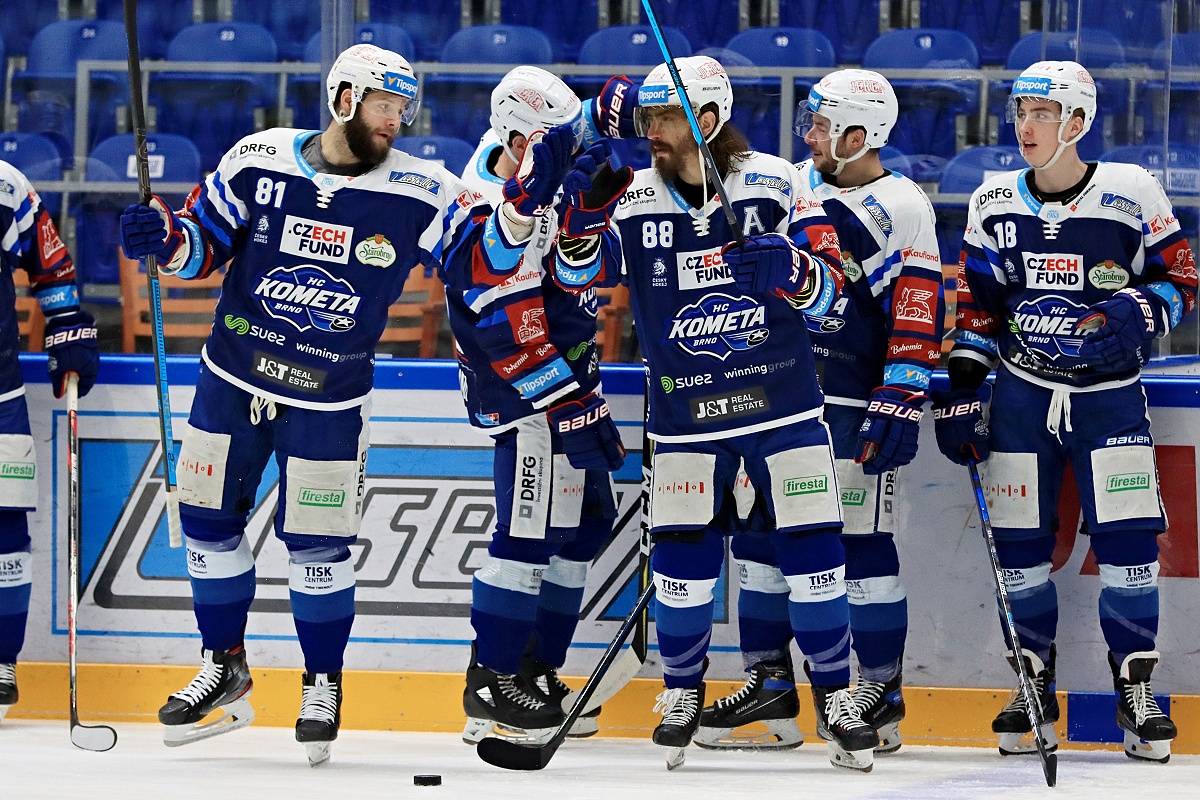 Photo Caption: HC Kometa have won three games in a row as they make their final push for the postseason. Photo Credit: Vít Golda.

With the regular season quickly coming to an end, HC Kometa are picking up steam for a final push toward the postseason.

The team beat HC Energie Karlovy Vary, 3-1, on Tuesday to follow up on a 9-3 shellacking of PSG Berani Zlín on Friday and a 0-1 nail-biter at HC Škoda Plzeň on Sunday.

Since a weeklong break — which put a stop to a stretch where the team had lost nine of 11 games — Brno has won four games and lost one in an extra time shootout.

The winning has moved Kometa to eighth in the standings with 66 points. But that is equal to Karlovy Vary and one point ahead of Vitkovice. Pardubice is seven points ahead in seventh place.

There are five games left, including hosting Bílí Tygři Liberec on Friday at 6 p.m.; going to Mountfield HK on Sunday at 4 p.m.; and hosting HC Olomouc on Tuesday at 6 p.m.

It appeared that FC Zbrojovka Brno would take a point home from Olomouc on Saturday. The game was already well into three minutes of extra time and nobody had scored the entire game.

Then, just like that, suddenly two Sigma Olomouc players got a long pass and moved swiftly behind the Brno defenders and into the open. Brno goalkeeper Martin Šustr went out aggressively, the Olomouc player Mojmír Chytil moved to the right and into the clear, and slotted the ball just inside the goal post.

But . . . there is a video replay now. When the video was examined, the referee changed his mind and decided that the final-minute breakaway was, in fact, a goal.

It was another late-game replay that went against FC Zborojovka. The previous week, a late winning goal was taken from Brno when a foul was discovered upon analyzing the video.

Lokomotiva Brno-Horni Herspice are fourth in the women’s top-league standings and enjoying their best season.

In the fall, they lost their first three games against the top teams in the league, then fought back to compile a season record of 3-0-4 with 9 points.

The first game of the spring will be this Saturday at AC Sparta Praha, the undefeated league leader, at 1 p.m.

The Renomia ŽBL still has a few games that need to be completed before the regular season is officially over, but the top four teams are already done with their 18 games.

Then, with identical 12-6 records, BK Žabiny Brno was third and KP Brno slipped to fourth.

Basket Brno will continue the best season in its history with the first game of Group A1 this Saturday at Opava at 6 p.m.

Group A1 includes the top eight teams from the regular season, which ended two weeks ago with Brno in fourth place with a 13-9 record. ERA Basketball Nymburk led the way with a 21-1 record.

The top eight teams play home-and-away games with each other team in Group A1. The top six teams move on to the postseason. The seventh- and eighth-place teams will need to earn their way with an extra step against teams from Group A2. The postseason is scheduled for April 9 to May 22.

Earlier this week, three Brno players — Šimon Puršl, Radek Farský and Richard Bálint — played for the national team in Vlinius, Lithuania. The team lost to the hosts on Saturday and beat Belgium on Monday.

A connoisseur of the unpredictable and unscripted drama of sports.
View all posts by Bruno Zalubil →
« Consolidation Among Opposition Raises Political Heat For Babiš
Stricter Lockdown Expected Due To Worsening Covid-19 Situation in Czech Republic »