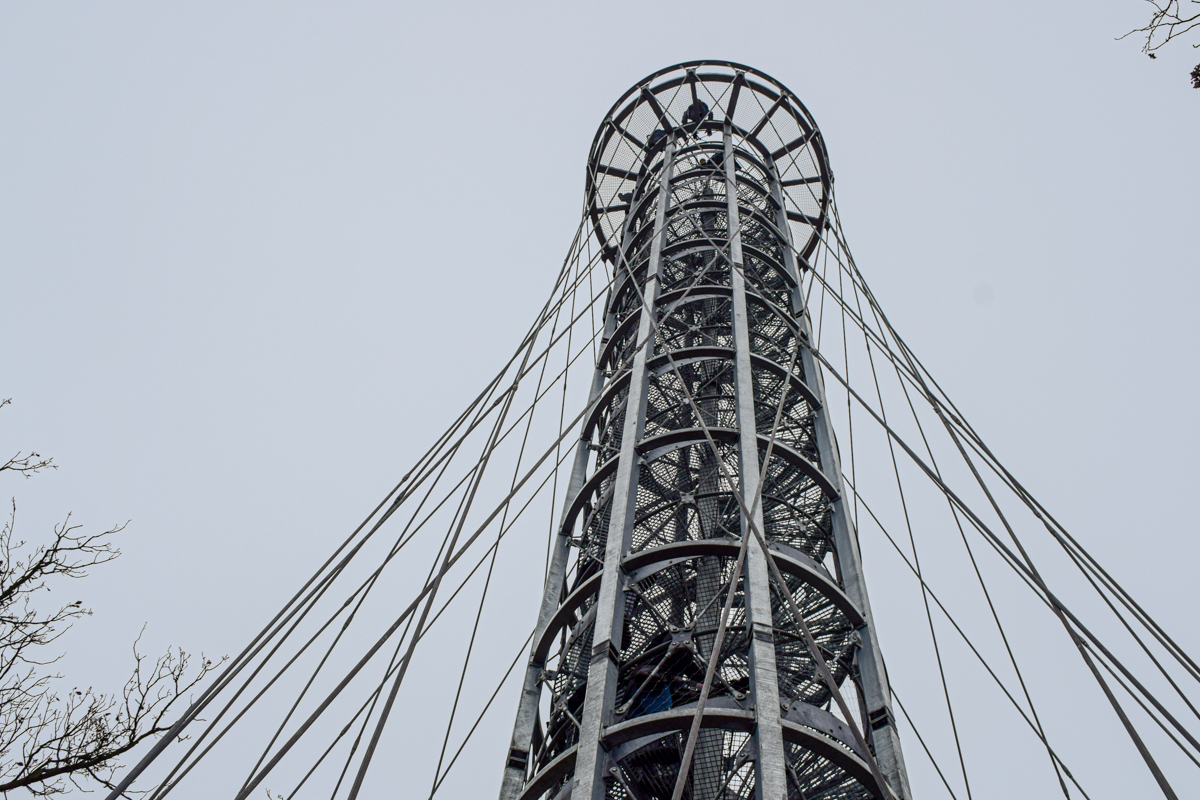 Four years ago, the Holedná viewing tower project won support from the Brno participatory budget in a public vote. The project has since been completed and the tower is free for the public. Despite being officially opened only for the last two weeks of December, the tower won a recent poll for ‘Lookout Tower of the Year 2020’. Photo Credit: KB / BD.

Brno, Mar 4 (BD) – At 35 metres, the viewing tower on Holedná is the tallest viewing tower in Brno. After completing the 208 steps to the top, visitors can look out over the whole Komín district, the old Bystrc, Brno Reservoir, Rozdrojovice, the Medlánecké airport, Žabovřesky, Jundrov, Kraví hora, the Brno exhibition grounds, Líšeň and Hády.

The proposal to build a lookout tower on the Holedná nad Jundrovem hill was partially funded by the Dáme na vás (‘‘We Give To You’’) participatory budget initiative and the Brno city budget. A total of CZK 484,810 was allocated by the participatory budget. However, the final cost of processing the architectural designs, documentation of the location, building permits and related fees, construction work and supervision came to CZK 6,769,166. A subsidy from the city budget was given to the municipal company Brno Forestry (“Lesy města Brna”) towards the construction of the tower.

‘‘Petr Chobola’s idea to create a new excursion destination in Holedná appealed to both Brno residents and the city authorities, and was one of the first winners of the Dáme na vás participatory budget scheme in 2017. In May 2018, a drone survey of suitable locations was carried out, where the lookout tower should be placed. It turned out that the original amount would not be enough, and therefore the costs would exceed the limit set by the participatory budget. However, as it was a very popular project, the city decided to support the construction as a separate investment project outside the participatory budget, and financed the completion of project documentation,’’ explained Tomáš Koláčný (Piráti), Deputy Mayor for Citizen Participation.

Planning permission was issued in June 2019 and a construction permit was granted in November. The tower was built by Brno Forestry in 2020 and was opened on December 15th.

The Holedná tower is one of the most recent attractions to open to the public in Brno. Not only has it become a popular place to visit, but it was voted ‘Lookout Tower of the Year 2020’ in a recent poll held on the Club of Friends of Lookout Towers website.

“I am very glad that we managed to implement this idea and that the lookout tower has become a popular place for walks and trips, which shows that people really like it. The victory in the survey by the Club of Friends of Lookout Towers is a reward not only for the entire implementation team, but for all Brno residents, with whose support the project was selected in the participatory budget,” said Koláčný.

Voting was open until the end of February 2021. Invitations to vote for the best tower were shared on the Brno Metropolitan newsletter, the website www.brno.cz, and on the BRNOmycity social media platform. The Holedná Tower received over 1,000 votes out of 3,628 cast, almost a third of the total. The poll results can be found here.

https://www.brnodaily.com/2021/03/04/brno-urban-guide/holedna-viewing-tower-voted-lookout-tower-of-the-year-2020/https://www.brnodaily.com/wp-content/uploads/2020/12/holedna-view-lookout-tower-credit-KB-BD-7-1024x683.jpghttps://www.brnodaily.com/wp-content/uploads/2020/12/holedna-view-lookout-tower-credit-KB-BD-7-150x100.jpg2021-03-04T11:32:01+01:00Kim BingelBrnoBrno Urban GuideNewsArchitecture,Brno,Brno Urban Guide,NewsFour years ago, the Holedná viewing tower project won support from the Brno participatory budget in a public vote. The project has since been completed and the tower is free for the public. Despite being officially opened only for the last two weeks of December, the tower won a...Kim BingelKim Bingelkjbingel@gmail.comAuthorSouth African in Brno. Independent international traveller. Enjoys nature and a sustainable lifestyle.Brno Daily