Further Relaxation of Restrictions From May 10th 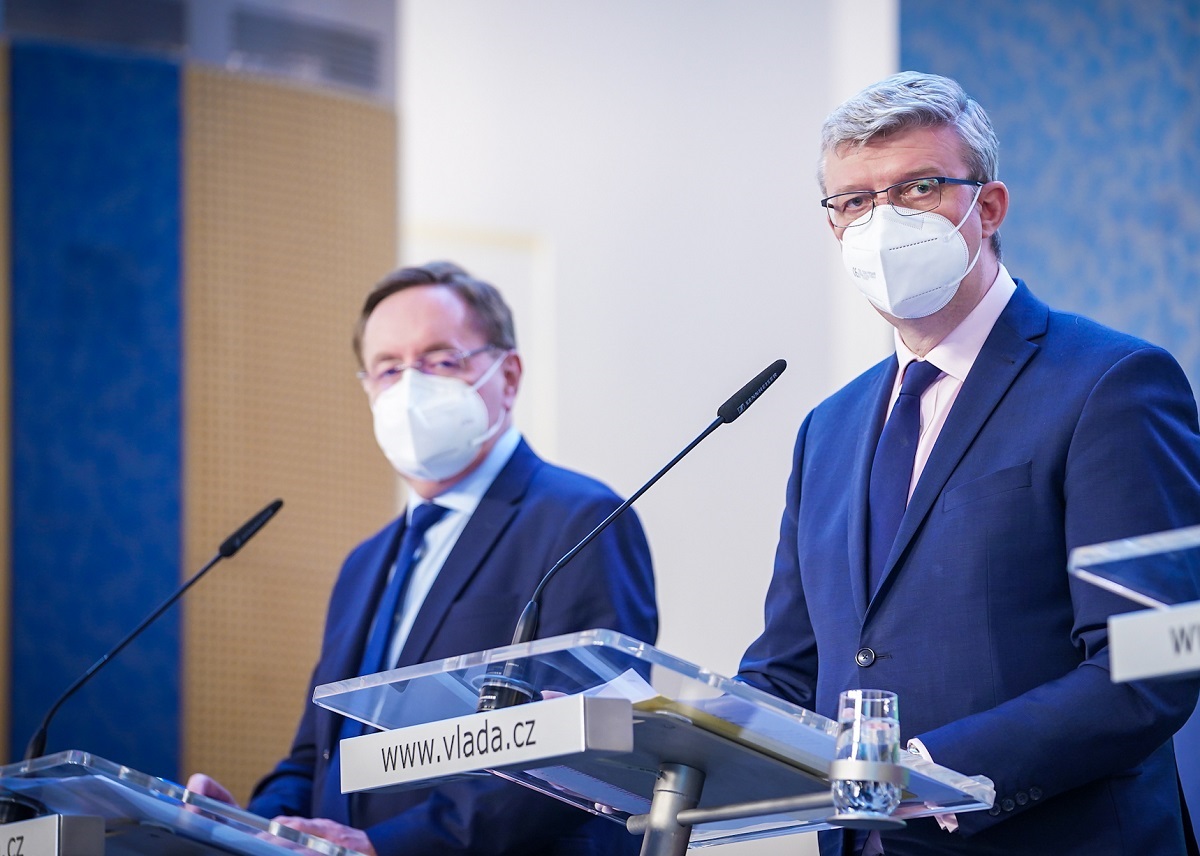 From Monday, May 10th, all remaining retail sectors and most services will be permitted to reopen. Respirators will no longer be required outdoors unless in large crowds, and in seven regions, pupils and students will return to schools. The changes were discussed at a cabinet meeting yesterday, and the final details will be approved on Thursday. Photo: Minister of Health Petr Arenberger and Minister of Industry and Trade Karel Havlíček at the press conference on May 3. Credit: Vlada.cz.

Czech Rep., May 4 (BD) – From Monday, May 10th, all remaining retail sectors and other services will be allowed to reopen, including shoe repair shops, second-hand car shops, car showrooms, solariums, travel agencies, photographic services, cable cars, and shooting ranges. The complete list of services has been published by the Ministry of Industry and Trade (MIT) here.

Under health and safety conditions, markets and marketplaces will also open fully, and up to 30 people will be allowed to attend weddings and funerals from May 10th, said Health Minister Petr Arenberger.

The government also said that respirators will no longer be required outdoors, unless in a place where it is impossible to maintain more than two meters distance.

Once-a-week testing will continue to be mandatory in workplaces until the end of June. According to the Minister of Industry and Trade, Karel Havlíček, as long as some business activities are suspended or significantly restricted by anti-epidemic measures, the state will provide support, even though the cabinet has not yet approved the extension of compensatory bonuses for the self-employed.

From yesterday, May 3rd, children from the second stages of primary schools returned to classrooms on a rotating basis in Prague, Hradec Králové, Plzeň, Karlovy Vary, Central Bohemia, Liberec, and Pardubice. In Central Bohemia, Liberec, and Pardubice, all children could return to kindergartens. In Hradec Králové, Karlovy Vary, and Plzeň, kindergartens fully opened last week due to the favourable epidemic situation.

Prague City Hall said that it would announce a public contract of CZK 2 million to administer PCR tests to pupils at multi-year grammar schools and dance conservatories, due to the lack of antigenic tests.

From next Monday, May 10th, kindergartens will be allowed to open fully, without respirators or tests, and the second levels of primary schools and lower levels of multi-year grammar schools will also open, in a rotating system, in Ústí nad Labem, Olomouc, South Moravia, and Moravia-Silesia.

Except in the Zlín, South Bohemian, and Vysočina regions, clinical and practical teaching, including internships for students of all years, will resume at universities throughout the Czech Republic. Exams, including entrance exams, will be possible with distancing of at least 1.5 meters, said Education Minister Robert Plaga (ANO).

From today, in regions where the epidemic situation is better, leisure groups can meet, applying the safety restrictions. Groups can be up to three children indoors and 20 children outdoors, in an area of ​​15 square meters per person, and with a negative test, said Arenberger.

A large-capacity vaccination center began operating in Prague yesterday, with approximately 1,100 people vaccinated. The capacity will increase in the coming days, reaching 7,000 people in the second half of June, since the center will provide the first and second doses of the vaccine at the same time.

A new large-capacity vaccination center opened yesterday in the Ústí nad Labem region, in the former Rector’s Office of the University of Ústí nad Labem. Up to 1,800 people per day will receive the vaccine there.

During the meeting, the government approved the possibility of booking a therapeutic spa stay for a fee as a self-payer, after vaccination. Until now, people could only stay in such facilities in the 90 days after coronavirus infection, criticized by the Association of Medical Spas as discriminatory.

Foreign Minister Jakub Kulhánek said that those who had the second dose of the Covid-19 vaccine at least 14 days ago will be able to return from red and orange countries without any tests or quarantine.

https://www.brnodaily.com/2021/05/04/news/politics/further-relaxation-of-restrictions-from-may-10th/https://www.brnodaily.com/wp-content/uploads/2021/05/Czech-Republic-Minister-of-Health-Petr-Arenberger-and-Minister-of-Industry-and-Trade-Karel-Havlicek-press-conference-credit-Vlada.cz_-1024x730.jpghttps://www.brnodaily.com/wp-content/uploads/2021/05/Czech-Republic-Minister-of-Health-Petr-Arenberger-and-Minister-of-Industry-and-Trade-Karel-Havlicek-press-conference-credit-Vlada.cz_-150x107.jpg2021-05-04T13:38:31+02:00Benedetta PisaniCzech Republic / WorldPoliticsCoronavirus,Czech Republic,PoliticsFrom Monday, May 10th, all remaining retail sectors and most services will be permitted to reopen. Respirators will no longer be required outdoors unless in large crowds, and in seven regions, pupils and students will return to schools. The changes were discussed at a cabinet meeting yesterday, and the...Benedetta PisaniBenedetta Pisanibenedetta.pisani@edu.unito.itAuthorHuman rights, equality, and sustainability activist. Passionate about writing, drawing, empathic listening, and social commitment.Brno Daily