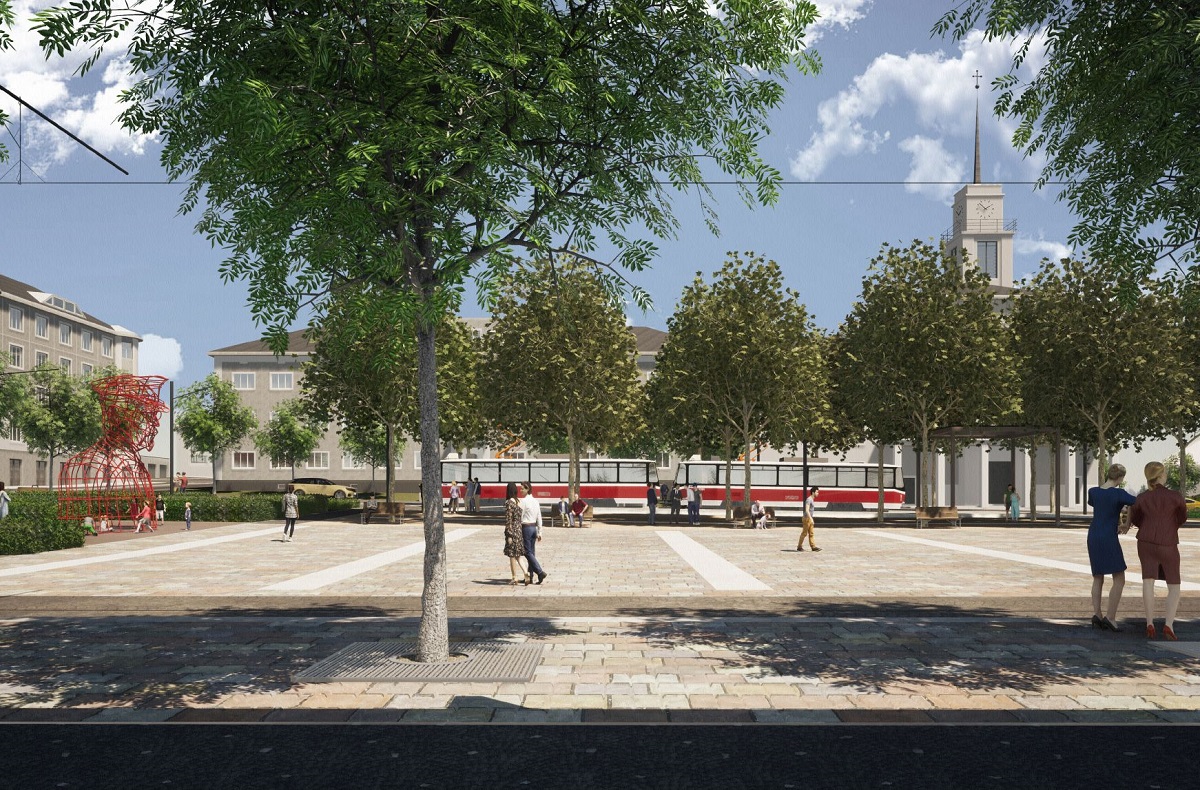 On May 12th, Brno councillors approved the results of the urban-architectural competition which aims to transform náměstí Míru. Among eight proposals, the expert jury selected the project designed by architect Luboš Františák and his team, the landscape architect Marek Holán, and the transport engineer Peter Štefančík. Visualization Credit: Luboš Františák / ARCHITEKT.

Brno, May 17 (BD) – In December 2020, the Brno City Architect’s Office (KAM) announced a competition to completely transform náměstí Míru, including the dilapidated buildings of the former military car repair facilities on Lerchova.

The organizers involved all key actors and the public in the preparation process, holding a neighborhood meeting in the hall of the Cyril and Methodius Primary School and two polls of residents. At the beginning of 2020, a survey was published online, in which 365 respondents participated. They were mainly residents, but also students or visitors living in the area. The complete results of the survey are available here.

“The main goal of the urban-architectural competition was to propose a possible transformation of náměstí Míru, which is currently not fulfilling its function, and therefore it is necessary to think about a comprehensive solution when planning its modifications. This will include the resolution of problematic transport connections as well as a new use for the dilapidated buildings of the former military complex on Lerchova and the adjacent park,” said Tomáš Koláčný (Pirates), 2nd Deputy Mayor and Vice-Chairman of the Competition Jury.

At the end of April, the expert jury selected the project designed by the architect Luboš Františák and his team, the landscape architect Marek Holán, and the transport engineer Peter Štefančík, from eight other proposals.

“The jury especially appreciated the generous concept of the central public space of Masarykova čtvrť with a clearly defined square. There is also an imaginative transport solution, which envisages running a tram loop around the perimeter of the newly-defined náměstí Míru and thus corrects the current confusing condition of the intersection,” said Michal Sedláček, director of KAM.

On Wednesday, May 12th, the jury’s decision was approved by Brno City Council. The results of the competition are available on the KAM website and all the proposals will be exhibited in the Brno Urban Center next to the Old Town Hall in the second half of June.

The winning project defines the central living space of the square by a city park with tree lines framing the view of the eastern colonnade, which forms the entrance gate to the Kraví hora park and also serves as a covered terrace with a café, facilities for public transport drivers, and a public toilet. On the southern side, the square is complemented by a new multifunctional facility with an attractive ground floor, which will replace the buildings of the former military complex. A 700 square meter area will be dedicated to a leisure center.

“A community center with a garden was one of the most frequent requests from the locals of Masarykova čtvrť. It will include a large hall with classrooms and workshop spaces. It will be possible to walk through the arcade of the house to the community garden with a large gazebo and a climbing wall for children,” said David Zajíček, head of the KAM public spaces department.

The multifunctional building will have four floors with apartments and two underground floors with garages. For the city to expand the space of the square, an exchange of land was agreed before the competition with the owners of Brněnka. There will be 17 private flats in the new building, while the city will own 48 flats, mostly smaller ones for parents with children, or elderly people.

The architects also incorporated sustainable solutions, with green rooftops and measures for rainwater management. Trees and permanent gardens will create a pleasant microclimate in the square.

“Urbanistically, it is a quality and refined design. The multifunctional building respects the height and values ​​of the existing buildings and the dominant feature of the church of St. Augustine”, added Sedláček.

Human rights, equality, and sustainability activist. Passionate about writing, drawing, empathic listening, and social commitment.
View all posts by Benedetta Pisani →
« QR Code Pass To Allow Easier Travel and Attendance of Mass Events
Relaxation of Pandemic Measures: What Will Change From May 24th? »