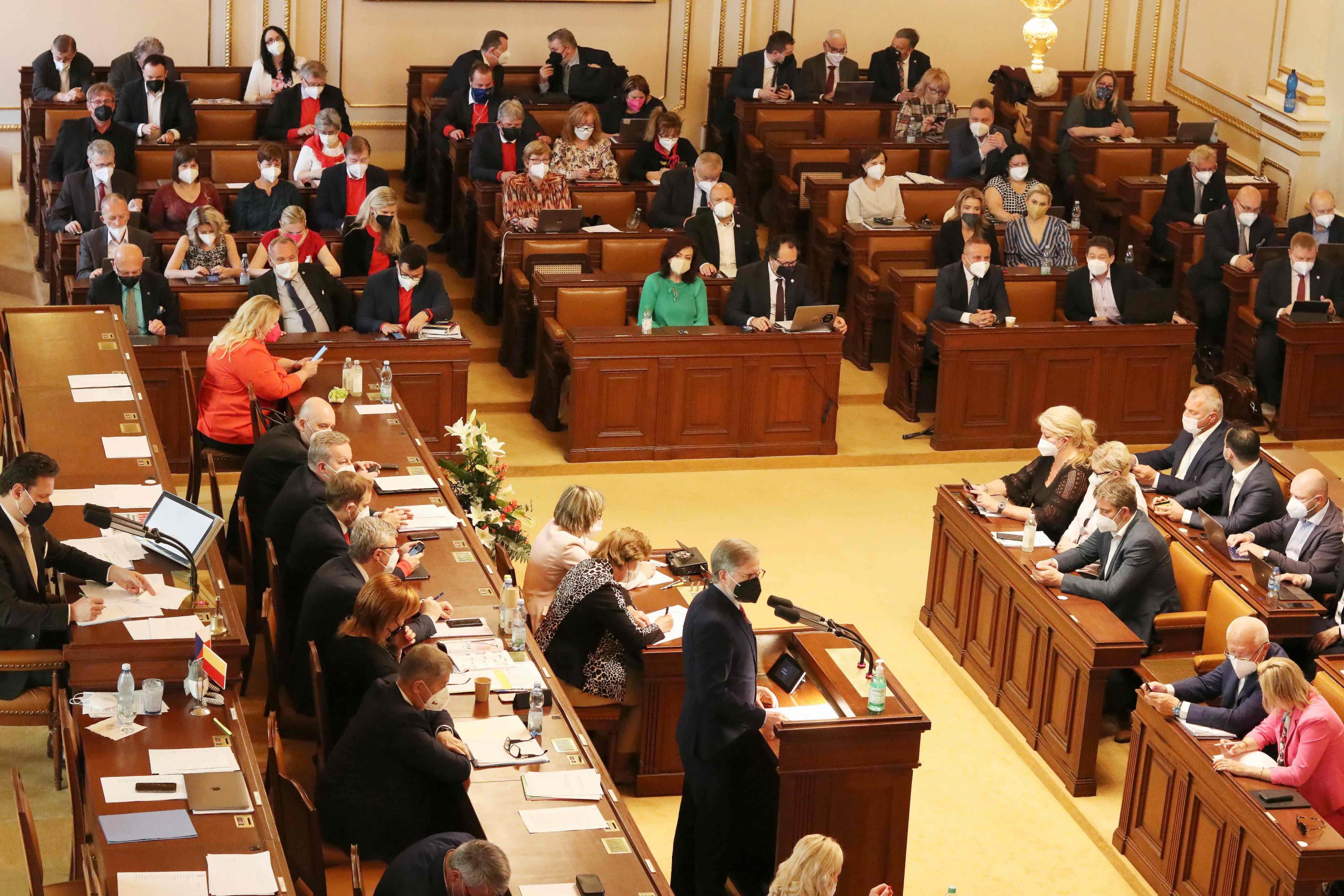 The opposition failed in an attempt to pass a vote of no confidence in the government yesterday.  The decision by the Communist Party to leave the Chamber in the morning meant that the opposition motion was unable to gather the 101 votes required to pass. 89 MPs from ODS, KDU-ČSL, TOP 09, Pirates, STAN, and SPD voted for the motion, and 82 deputies voted against. Photo Credit: Psp.cz.

Czech Rep., June 4 (BD) – The cabinet of Prime Minister Andrej Babiš (ANO) survived a no confidence motion on Thursday, for the third time, as reported in Czech media. The motion was submitted by deputies from the SPOLU coalition (ODS, KDU-ČSL, and TOP 09), and the alliance of Pirates and STAN. They claimed that the government has failed to fight the pandemic and has not been able to secure strong international solidarity in the diplomatic rift with Russia, also pointing to Babiš’s alleged conflict of interest.

The chairman of the KSČM, Vojtěch Filip, criticized the government for taking an anti-Russian stance after the revelations of Russian secret service involvement in the explosions in Vrbětice. He also criticised the government for not pushing for a merger of health insurance companies, which he considers an austerity step that he said would help health care in a pandemic. However, he also said that the party would not join a motion of no confidence proposed by the opposition.

“The government does not have our trust, but neither do the right-wing parties led by the ODS, TOP 09, STAN, KDU-CSL, and the Pirates. That is why we will not take part in this useless theater and we are leaving to work for the citizens,” said Filip at the end of his speech. At that point the Communist MPs left the Chamber, thus depriving the opposition motion of sufficient votes to pass. MP Jiří Dolejš confirmed the final decision to leave the Chamber before the vote on Twitter on Thursday morning.

As reported by iDNES.cz, after the Communists left the negotiations, the result of the vote was clear in advance. “The opposition does not have those votes, we could have made a few laws,” said Jan Hamáček, Deputy Prime Minister and leader of CSSD. “It’s a waste of time today. Some will be interested until 19:15, then the hockey will start, and no one will be interested after that.”

Babiš defended his government’s record and rejected the accusations of a conflict of interest. Babiš also accused the opposition of taking advantage of the pandemic to attack the government, and reserved his strongest attacks for the coalition of Pirates and STAN.

https://www.brnodaily.com/2021/06/04/news/politics/government-survives-no-confidence-vote-after-communists-leave-the-chamber/https://www.brnodaily.com/wp-content/uploads/2021/06/Czech-republic-chamber-of-deputies-parliament-credit-psp.cz_-1024x683.jpghttps://www.brnodaily.com/wp-content/uploads/2021/06/Czech-republic-chamber-of-deputies-parliament-credit-psp.cz_-150x100.jpg2021-06-04T13:09:02+02:00Benedetta PisaniCzech Republic / WorldPoliticsAndrej Babis,Czech Republic,PoliticsThe opposition failed in an attempt to pass a vote of no confidence in the government yesterday.  The decision by the Communist Party to leave the Chamber in the morning meant that the opposition motion was unable to gather the 101 votes required to pass. 89 MPs from ODS,...Benedetta PisaniBenedetta Pisanibenedetta.pisani@edu.unito.itAuthorHuman rights, equality, and sustainability activist. Passionate about writing, drawing, empathic listening, and social commitment.Brno Daily