United Islands of Prague: Return of the Island 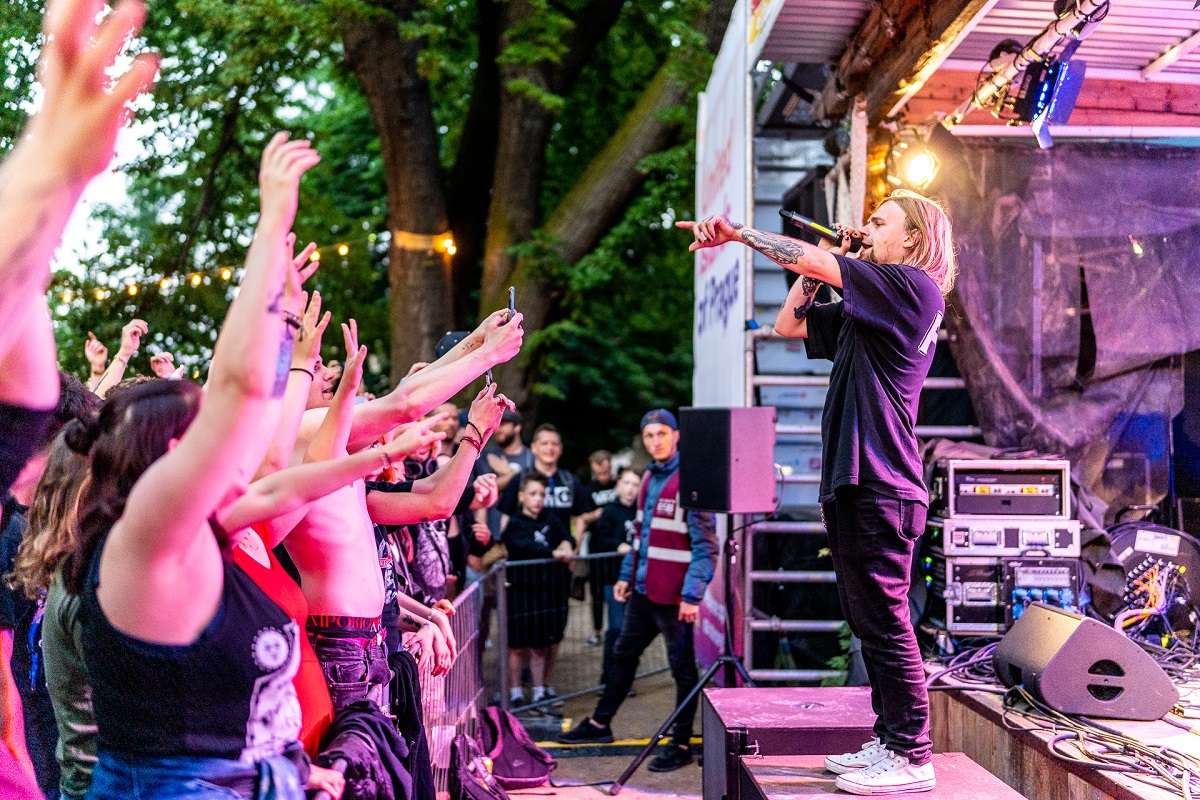 After last year’s event was cancelled, the United Islands of Prague returned last weekend, an occasion to enjoy, finally, an outdoor event with many bands and activities. It was also a chance to see how festivals are adapting to the new rules imposed for event management after the last year and a half of chaos. Brno Daily’s Anthony B reports on the new normal for Czech music festivals. Photo: Redzed at United Islands of Prague. Credit: Stanislav Pechacek.

Czech Rep., June 30 (BD) – United Islands of Prague, a free festival on Prague’s Kampa Island, its riverside and on Střelecký Island, took place for the 18th time last weekend. This year saw the return of Barbora Šubrtová as program director, presenting 40 bands on five stages throughout Friday and Saturday, accompanied by a rich festival program of activities and lectures.

Managing a free festival in a city in the current context is a challenge. Hygiene rules were applied and they were pretty simple: PCR tests or proof of vaccination was required to enter the areas in front of the stage, but it was possible to watch and enjoy the concerts even from outside these zones.

Audiences were advised to sit down near the biggest stages, sanitizers were installed in lots of places around the site, and security was omnipresent. This year’s festival was a beta phase for a bigger program announced for next year, a kind of test…

Starting on Friday after a rainy afternoon, the crowd slowly gathered, and the festival could finally start.

The first notes of a surprise came from the band něco něco. They played a one hour set of solid tunes on the ČESKÝ ROZHLAS VLTAVA STAGE, hovering between electro pop and slightly disco wave. Their songs are all in Czech with dynamic drums and interesting vocals, often melodic, which cut across an energetic music composition and take on a real dynamism live.

The Prague-based band alternates between the unique vocals of Alžběta T. and her fellow singer Tomáš Tkáč, a real duet on some songs, two voices with the same energy, a band which between the flow and the identity seems to have a real following. It was a pity people had to sit down, because you can very much imagine their tracks resonating on a real dancefloor…

Just the time to grab a beer and head to the ČT ART STAGE, where Shelter Boy (DE) were presenting fresh young easy-listening compositions, guitar rock sung in English, nothing so informal but effectively executed and great communication between songs with the audience.

But for me the surprise was elsewhere; ÄTNA (DE) on the Radio 1 stage, a mix of deep atmospheric and danceable beats and transversal singing, a mix of noisy songs capturing identity and bright melodic lines.

Their set finished on the island as the light faded, switching the slow and sweet for the faster and more complex sounds, the hypnotic, the explosive. The audience refused to let them go after a great festival set, demanding two encores. The first day done; the big meal is coming tomorrow.

Saturday: Beer and Hip hop under the heat…

Saturday was sunny and warm, finally, starting my day with Krakow-based LOR, featuring violin, piano and pop vocals. Their set was instrumental, calm, and somehow a great mix between classical structure and a more modern approach to pop music standards.

This set was mostly appreciated by families, who were out in force. Through an hour and a half set with peaks of sweet and simple musical sensations, it was a real pleasure to discover them, young and full of energy. They even managed to get the audience on their feet, and slowly the crowd started to dance…

Performing at the same time on the ČESKÝ ROZHLAS JAZZ STAGE, I caught 20 minutes of Arleta, a 24-year-old Czech hip hop singer, with the darkest trap I have ever heard in Prague, a mix of Witch house beats and cold lyrics, expressed like soft snake venom, using a simple duo structure between Arleta’s vocals and a DJ providing loops, and that was all. Efficient, original, a real surprise and an exciting artist to follow.

Time for a short run and listen to one of the most anticipated artists, Bára Zmeková (ČESKÝ ROZHLAS VLTAVA STAGE), a great mix of jazzy folk poetic atmosphere, a piano, and a voice, precise and intense, keeping the listeners under her spell for an hour, ballads and high-level melodies enveloping the audience, an hour that passed too fast, ears under control and mind travelling far and wide, a great performance from a promising artist who is already on trend.

After that a short peaceful break, before Rohony, Ostrava-based hip hop MCs with Serbian roots.

No need for any Red Bull for energy here, for this hour-long trap/rap family gathering, three MCs on stage, heavy (but classic) beats, and lot of commentary on the modern age, issues making money, a boring life in their former town, and the drastic hope to exist and share that with the crowd. The crowd jumping until the very last song proved the effectiveness of their set.

I returned to the ČESKÝ ROZHLAS VLTAVA STAGE for the sensational 18-year-old singer-songwriter Amelie Siba, already with one self-produced album behind her, and a strong identity on stage.

Without over-complexity on the musical side, Siba shows kindly that music can be simple, if feelings and work are melted together, a really promising artist that I hope will not be destroyed by mainstream radio.

Finally I headed back to the RADIO 1 STAGE for REDZED, the real hip hop alien of the Czech scene (but with most of the lyrics in English) and playing for the first time with an instrumental band, bass, guitar and drums…

Well, for those who know Ghostmane, we are here in the same musical territory, a delicious mix between rap and metal, dark electro beats and lyrics shouted and sung with an energy from the alternative scene.

You can easily feel the self-produced confidence, superb presence on stage and positive chaos in the audience, moshing and pogoing, knowing the songs by heart, feeling a real connection with the artist.

People in the crowd were falling over and getting back up to jump harder, for an hour and a half without rest, displaying a collective joy to finally be back feeling and living the stage atmosphere again.

Redzed and his five albums are clearly a hit with the emergent generation of Czech youngsters, and could be a major influence on the rap scene in the next few years. Here he played a memorable set, in what was not an end but really the beginning of a new era for music events. Nothing will be the same as before the pandemic, but this does not necessarily mean that everything will be worse…

If the music is hope, then this united island is the garden of hope.

For more about the artists…

https://www.brnodaily.com/2021/06/30/news/united-islands-of-prague-return-of-the-island/https://www.brnodaily.com/wp-content/uploads/2021/06/Prague-United-Island-Redzed-Credit-Stanisalv-Pechanek-1024x683.jpghttps://www.brnodaily.com/wp-content/uploads/2021/06/Prague-United-Island-Redzed-Credit-Stanisalv-Pechanek-150x100.jpg2021-07-01T18:00:42+02:00Anthony B.Czech Republic / WorldCzech Republic,entertainment,Festival,MusicAfter last year’s event was cancelled, the United Islands of Prague returned last weekend, an occasion to enjoy, finally, an outdoor event with many bands and activities. It was also a chance to see how festivals are adapting to the new rules imposed for event management after the last...Anthony B. biasiolianthonypro@gmail.comAuthorMusic is a universal language, the one I prefer to use, from first notes of rehearsal to stages, between studios and official releases, I like to comment, spread and analyze, since two decades, new trends and old school movements, hoping a giant sound system will finally save the world...Brno Daily

Music is a universal language, the one I prefer to use, from first notes of rehearsal to stages, between studios and official releases, I like to comment, spread and analyze, since two decades, new trends and old school movements, hoping a giant sound system will finally save the world...
View all posts by Anthony B. →
« Playing Games For a Good Cause. Players Around The World Can Help Fakultní Nemocnice Brno By Purchasing Virtual Face Masks
Family of Roma Man Who Died During Police Intervention File Criminal Complaint »