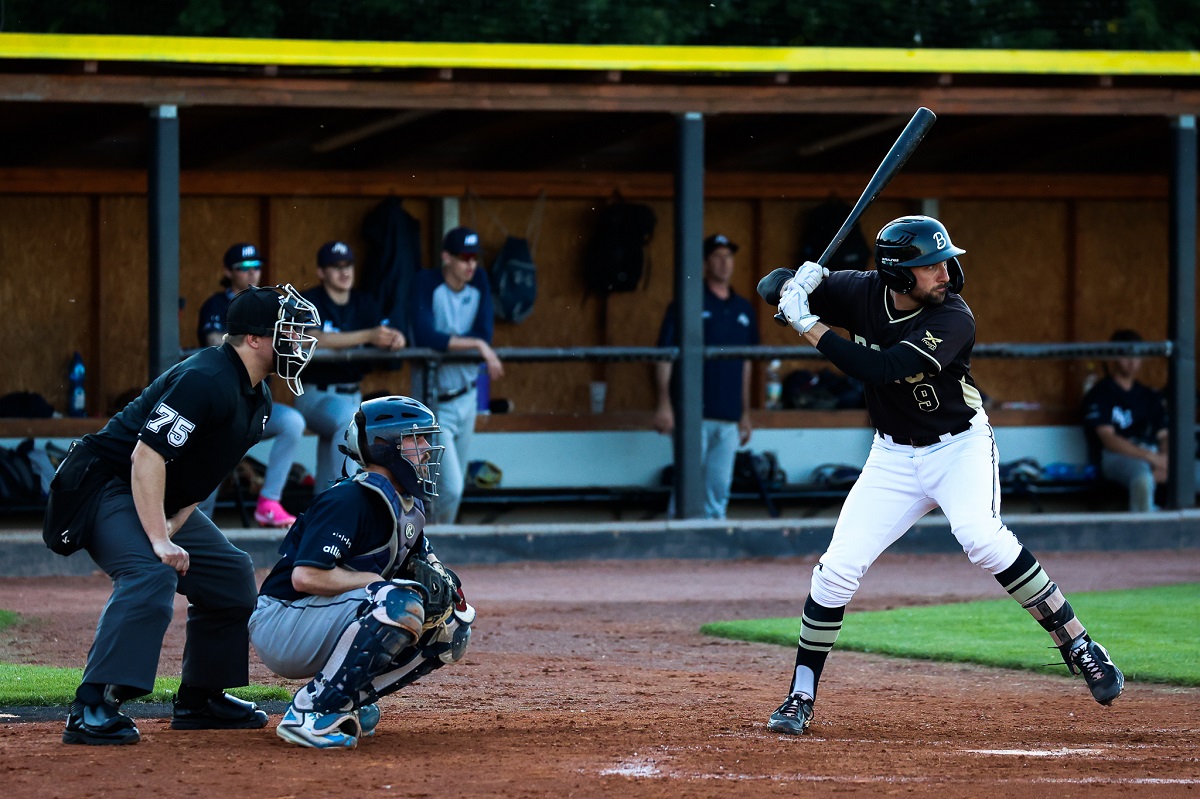 Photo caption: Draci Brno are in a four-team dog-fight for the seedings for the postseason. The next two weeks will determine the order. Photo credit: Lenka Brožová.

Draci Brno will start the final two weekends of play atop the Top Six extraliga standings, but the order of the top four teams that will advance into the postseason is far from determined.

Draci Brno (6-3) has a half-game lead over Eagles Praha (7-5), the team that it will play in a three-game series this weekend.

The Draci will play the Eagles in Brno only on Saturday (first pitch at 1pm), with the Friday and Sunday games in Prague. On the final weekend of the season, the Draci get Tempo Praha in Brno on July 30 and 31.

Hroši Brno, who lost two of three to Eagles Praha last week, have just three games left, all of them against Ostrava. One game will be in Brno: Sunday at 4 pm.

For updated information and the schedule for Czech extraliga baseball, go to the league website at https://extraliga.baseball.cz/.

Last week, the Draci won four games at the Confederation of European Baseball Cup in Lieusaint, France, and, though they lost their final game to the home team, took the title in a tie-breaker at the rainy tournament with a 4-1 record.

Brno’s Přemek Chroust was the top batter with a batting average of .563.

The Brno Alligators allowed six touchdowns before getting on the scoreboard as they lost their first game of the truncated 2021 season last Saturday, 7-52, to the Prague Lions at home.

The Brno touchdown, however, was a nice one: Quarterback Tomáš Fortelný hit Robert Wirth for 44 yards with 2:19 left in the first half.

The Kittford Liga continues this weekend, with the Alligators hosting the Ostrava Steelers on Saturday at 4 p.m. The game is at Ragby Bystrc.

The highest league of American football started last week for the teams that elected to participate. The Alligators are the only Brno team that is listed in the schedule. They had a first-week bye.

A total of five teams decided to participate in the Kittford Liga this season: Vysočina Gladiators, Přerov Mammoths, Prague Lions, Ostrava Steelers and the Brno Alligators. There are eight rounds to this summer season, which stretches through to the end of August. The top two teams will then meet for the title game.

The Brno Sigrs, who were poised for success in the postseason last fall, were denied their chance for glory when restrictions against the spread of the coronavirus prematurely ended the season.

For updated information and the schedule for the Czech Association of American Football, go to the league website at https://www.caaf.cz/.

The Brno Cricket Club Rangers finished the regular season atop the Division 1 standings and they will face off against the No. 4 seed Prague Spartans CC Vanguards in the semifinals at Vinor Field in Prague on Saturday. The match starts at 11am.

The winner advances to the finals against either Vinohrady CC or Prague CC Kings.

In addition to domestic-league glory, the winner will represent the league in a future tournament in Spain.

Last week, the Rangers hosted the Prague Spartan Vanguards and won, scoring 136 in 20 overs compared to 114/9 (20). The Brno Man of the Match was Ushan Gunathilake, who scored 31 runs in 39 balls and had two catches and two stumpings.

For updated information and the schedule for Czech Cricket, go to the league website at https://www.czechcricket.cz/.

https://www.brnodaily.com/2021/07/21/sport/brno-sports-weekly-report-draci-fight-to-hold-onto-top-spot/https://www.brnodaily.com/wp-content/uploads/2021/07/Sports_credit_Lenka-Brozova.-1024x682.jpeghttps://www.brnodaily.com/wp-content/uploads/2021/07/Sports_credit_Lenka-Brozova.-150x100.jpeg2021-07-21T11:54:31+02:00Bruno ZalubilSportBrno,Czech Republic,SportPhoto caption: Draci Brno are in a four-team dog-fight for the seedings for the postseason. The next two weeks will determine the order. Photo credit: Lenka Brožová.Brno, July 21 (BD) — Brno Alligators host Ostrava on Saturday after a first-game loss, and Brno Cricket Club Rangers start the postseason...Bruno ZalubilBruno Zalubilbzalubil@hotmail.comAuthorA connoisseur of the unpredictable and unscripted drama of sports.Brno Daily