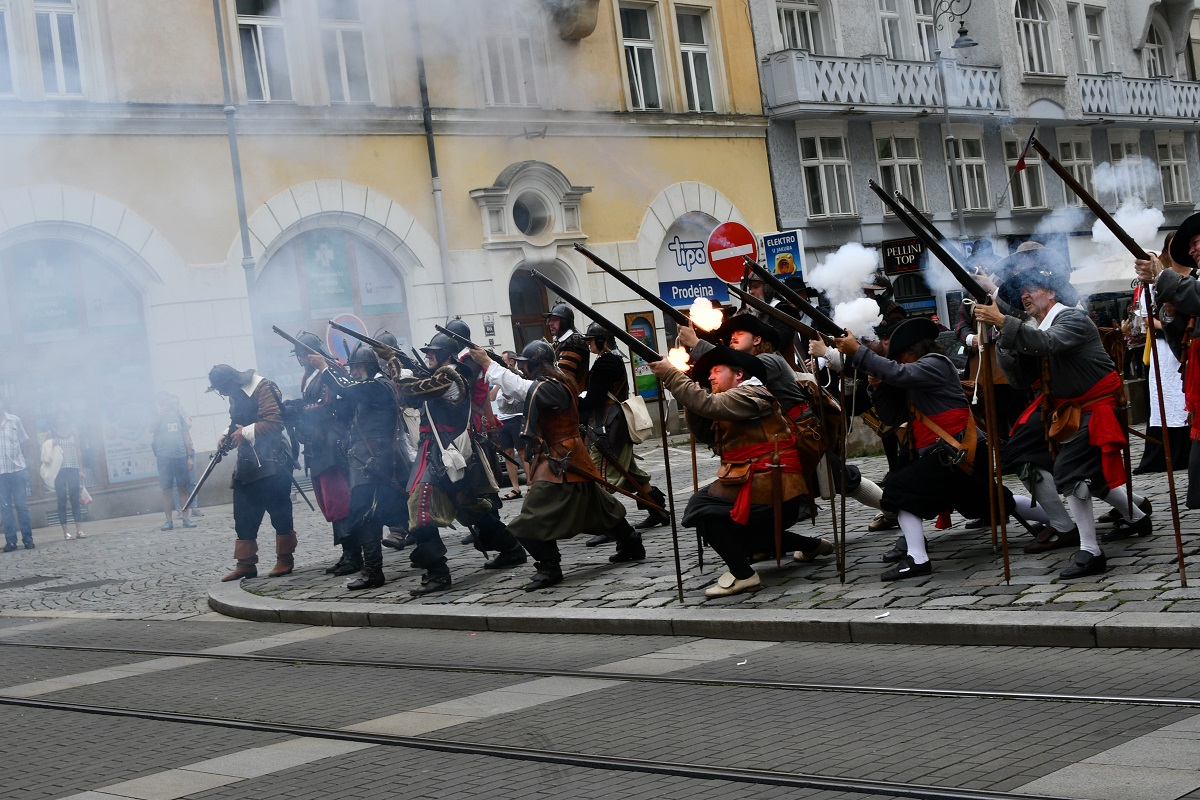 For three days in August, Brno will be looking back to the events of 1645. The Brno Day event (“Den Brna”) on August 13th-15th, commemorates the successful defense of the city against the Swedes during the final years of the Thirty-Years War, one of the most destructive wars in European history. Photos: TMA / Brno Daily.

Brno, Aug 11 (BD) – Every year since 1995, the City of Brno has celebrated its historic victory against the Swedish incursion on August 15th. Legend has it that General Torstenson undertook to conquer the city by noon. The city’s defenders learned about this claim and, as they were already exhausted, made the bells ring one hour earlier, at eleven o’clock. Torstenson kept his promise and ordered the retreat. To this day, Petrov cathedral’s bells chime for noon at 11am, and the glass spheres fall from the mysterious black time machine on Náměstí Svobody at 11am. On Saturday, August 14th, special Brno Day spheres will fall from the clock, every hour from 11am to 11pm.

Brno Mayor Markéta Vaňková (ODS) welcomed the return of the commemoration. “Last year, we unveiled a new statue of Father Martin Středa, which commemorates the famous events all year round. This Jesuit played one of the key roles in the defense. I am glad that the popular battle could return to the program this year, which will bring historical events closer to visitors,” she said.

Saturday in Brno will be devoted to military history, and the program will culminate in a historic battle. Shortly after 10am in the morning, a military parade from the era will pass through the city, ending with a short ceremony to lay a commemorative wreath on the grave of the commander of the city’s defence, Raduit de Souches, in the Church of St. Jakub.

“In the afternoon, a cavalry show, falconers, a historical fashion show and much more await spectators in Kraví hora park. The biggest event is the re-enactment of the Battle of Brno, which will take place again after a one-year break,” said Ondřej Anton from the Society of 1645. The re-enactment will start at 4:15pm.

“On Sunday, a pontificate service will be celebrated in Petrov Cathedral, and later in the afternoon, a concert will take place in the gardens below Petrov,” said Martina Jandlová, spokesperson for the Brno Diocese.

The event will take place from August 13th-15th, and is organized by the Brno Tourist Information Centre, the Diocese of Brno, and the Society of 1645. The complete program is available here.

https://www.brnodaily.com/2021/08/11/events-in-brno/brno-day-returns-with-re-enactment-of-a-famous-thirty-years-war-battle/https://www.brnodaily.com/wp-content/uploads/2021/08/den-brna-parade-credit-tma-brnodaily-45-1024x683.jpghttps://www.brnodaily.com/wp-content/uploads/2021/08/den-brna-parade-credit-tma-brnodaily-45-150x100.jpg2021-08-11T14:59:45+02:00BD StaffBrnoEvents in BrnoNewsBrno,Events in Brno,HistoryFor three days in August, Brno will be looking back to the events of 1645. The Brno Day event (“Den Brna”) on August 13th-15th, commemorates the successful defense of the city against the Swedes during the final years of the Thirty-Years War, one of the most destructive wars in...BD StaffBD Staff team@brnodaily.czAdministratorBrno Daily - English News and Events in Brno.Brno Daily