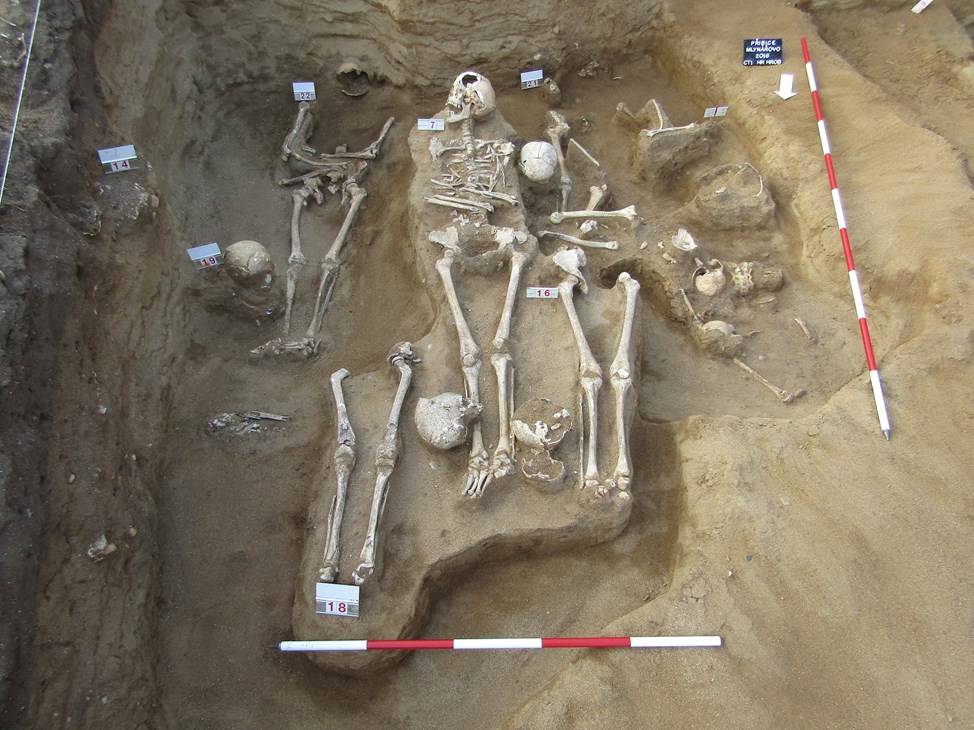 Photography of the excavations at the Habán cemetery in Přibice. Photo credit: Masaryk University

Brno, 18 Aug (BD) – Anthropological and archaeological research at the cemetery in Přibice near Brno offers a unique insight into the lives of members of the reformist Christian society that claimed to be New Baptists, also known as the Habáni. A team of anthropologists from the Institute of Anthropology at the Masaryk University Faculty of Science is working on the site for the fifth season. The task this season is to find the edge of the burial site, which is the largest Habáni burial site in the territory with 97 skeletons discovered so far.

Using a specific methodology that studies bone composition, the scientists will investigate the eating habits of this community. “We want to use so-called isotopic analysis, which allows us to reveal eating habits through the trace elements contained in parts of the bones and teeth, where trace elements such as nitrogen or strontium were deposited, depending on what they ate,” explained Tomas Morkovsky, head of the research project. The scientists will then compare the results of the analysis with a geological map of Europe and an isotopic database created by French anthropologist Kevin Salesse, who has been working at the MU Faculty of Science since this year.

“The location of the cemetery, outside the built-up area, offers excellent conditions for exploring it in all its original extent. In fact, Habáni burial sites are often completely destroyed or located in built-up areas. A complete search of the entire cemetery is therefore quite exceptional in the context of researching the Moravian Habáni,” Mořkovský added. In addition, during the search of the burial site, in which students are assisting, pins, nails and parts of clothing fasteners – hooks and eyelets – were found, which are still used today.

Scientists will also conduct genetic analysis of individual bodies, which will provide information on the origin of the Habáni. This population came to Moravia from Switzerland and Tyrol in the 16th century and lived in closed communities. They differed from the rest of the population in their lifestyle (following the example of the early Christians) and concentrated on the production of quality products. They were outstanding craftsmen, excellent cutters, watchmakers and wine makers, and their ceramics were famous.

According to the current estimates of anthropologists, the habanite religious community once had one of its largest courts in Přibice, with more than 400 residents. Despite the fact that, according to written sources, they were perceived as ‘strange’ by the other people in the area, they long lived under the protection of the local nobility, for whom they represented a source of profit thanks to the tribute paid from their property. This coexistence lasted for 100 years. After the Battle of White Mountain in 1620, however, pressure for the New Christians to convert or leave the territory increased considerably and the community was ostracised.

During the Thirty Years’ War, the manor of Přibice became a target for conquering expeditions by imperial mercenaries because of its wealth. The largest massacre took place in July 1620, when imperial soldiers killed and wounded 72 Habani peopl, including women and children. The last ambush took place in January 1621. Buildings were burnt down and the court was not rebuilt. The survivors emigrated to Slovakia, Romania and Canada, where they settled and still live today. A mass grave remains in Pribice.

https://www.brnodaily.com/2022/08/18/brno/new-masaryk-university-study-reveals-eating-habits-of-habani-society-400-years-ago/https://www.brnodaily.com/wp-content/uploads/2022/08/Cemetery-bones-credit.Masaryk-University.jpghttps://www.brnodaily.com/wp-content/uploads/2022/08/Cemetery-bones-credit.Masaryk-University-150x112.jpg2022-08-18T09:12:08+02:00Ilaria BriziBrnoAnthropology,Archaeology,Brno,Masaryk UniversityPhotography of the excavations at the Habán cemetery in Přibice. Photo credit: Masaryk University  Brno, 18 Aug (BD) - Anthropological and archaeological research at the cemetery in Přibice near Brno offers a unique insight into the lives of members of the reformist Christian society that claimed to be New Baptists,...Ilaria Brizi ilabrizi12@gmail.comAuthorItalian girl with a master’s degree in marketing and advertising. I love travelling, reading, writing, listening to music, but most of all I love having breakfast. Against cheese on tuna pasta.Brno Daily

Italian girl with a master’s degree in marketing and advertising. I love travelling, reading, writing, listening to music, but most of all I love having breakfast. Against cheese on tuna pasta.
View all posts by Ilaria Brizi →
« Czech Republic Ranks 23rd in Europe for English Language Proficiency
Poll: Babis Would Win First Round of Presidential Election, Pavel The Second Round »