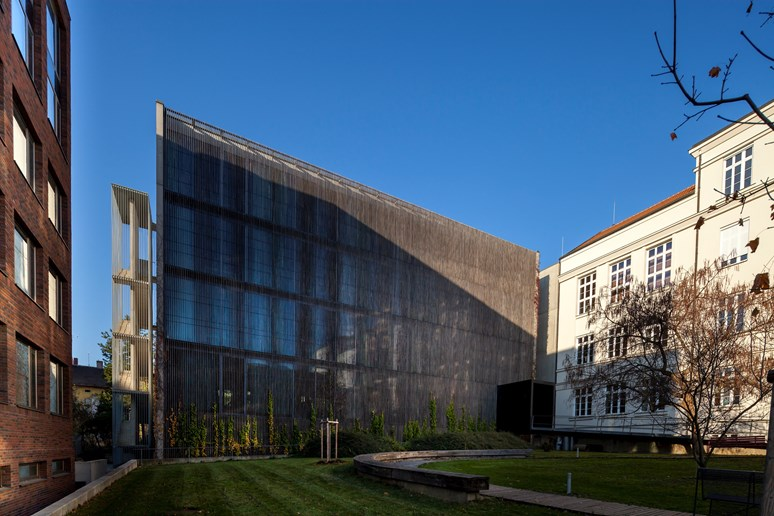 Brno, Nov 28 (BD) – In the year in which the Central Library of the Masaryk University Faculty of Arts celebrates its 20th anniversary, it has received an award from the Czech Chamber of Architects for its qualitative contribution to society. The jury judged works resulting from architectural competitions between 1993 and 2015, and selected 10 winners from a total of 125 designs.

The Deset competition judged works resulting from architectural competitions in two categories: 1993-2004 and 2005-2015. The University Library in Brno succeeded in the first of these categories. “We are very happy about the award, and it is certain proof for us that the library is still timeless after 20 years. It still looks modern, even though the building has sensitively blended into the historic grounds of the Faculty of Arts,” said Markéta Bočková, Head of the MU Faculty of Arts Central Library.

The FF MU University Library was the first major work of Brno minimalist architects Ladislav Kuba and Tomáš Pilař. “It is very important to us that the library maintains its unmistakable style,” emphasised Bočková, adding that they still consult with architect Kuba on major interior interventions.

In relation to the surrounding urban buildings, the library is designed as a simple, contrasting building, which reflects its importance to the life of the faculty. The contrasts are also reflected in the interior materials: the rough monolithic concrete structure is complemented by toughened glass with coloured printing, powder-coated steel elements, and stainless steel. The library is exceptional in the size of the free selection, which is divided into four floors. The maximum capacity of the library is 130,000 books, and the building currently houses 84,600 volumes.

According to the evaluation of the jury of the Czech Chamber of Architects, the competition design by Kuba and Pilar solved two long-standing problems of the Faculty of Arts: the dismal state of the public space of the university campus and the inadequate space in the previous library. The jury also commended the interior. “The shelves with the publications on display inside the library form a regular rhythm of the open spaces of the reading rooms. (…) However, the very counterpoint of the library can be considered primarily the organic forms of the park landscaping in its foreground, where the architects Kuba and Pilař have abandoned their orthogonal handwriting in favour of natural elements.”

Other awards the library has received since its opening in 2002 include the Grand Prix of the Architects’ Association 2002, the Interior of the Year 2002, the Union of Visual Artists 2002, and the Ministry of Industry and Trade Award.

In the future, solar panels will be installed on the library, and there are plans to renovate the sanitary facilities and replace light bulbs and fluorescent lamps after two decades. “We have decided to go the route of environmental sustainability and replace the energy-saving bulbs with LED bulbs without having to change the entire fixtures,” said Martin Kunc, deputy head of the library. For example, Tiché Kafe, where students can heat up their food and thus eliminate the use of plastic, also works in an energy-efficient way. Since its opening, the library has not used air conditioning, and the temperature and light inside the building are regulated by wooden slats covered with suction cups. In November 2022, the library also saw the replacement of its roof glass; the new triple glazing also contributes significantly to thermal savings.